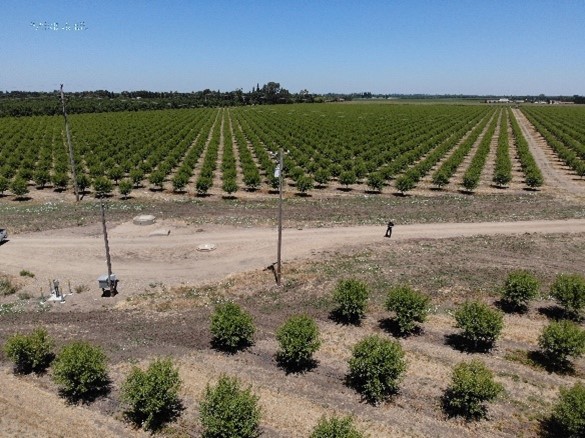 In 2018 and 2019, EBMUD released a total of 342 acre-feet of the 1,000 acre-feet of MokelumneRiver water available to NSJWCD as part of the pilot.About one-third of the water released was diverted by NSJWCD and either used for irrigation or accounted for as recharge in the NSJWCD service area.

An existing irrigation well operated by NSJWCD will be used to extract the banked groundwater for this project. Construction of the additional facilities required to convey groundwater nearly three miles from this well and into EBMUD’s Mokelumne Aqueducts is currently underway by EBMUD and NSJWCD and is expected to be completed by early 2022.

Groundwater extraction is scheduled to take place for approximately two weeks in early 2022 to test the facilities that will bring San Joaquin County groundwater into EBMUD’s raw water system for the first time. EBMUD currently has approximately up to 45 acre-feet of groundwater available to extract. After the remainder of the DREAM recharge water is released by EBMUD to NSJWCD in a future year, groundwater extraction will occur for one or two longer periods to complete the pilot test.

Prior to delivering water to customers throughout the East Bay, EBMUD treats raw water to levels that meet or exceed standards for safe drinking water. When EBMUD blends groundwater into our raw water source as part of the DREAM project, the same high standards of treatment and testing will apply. EBMUD has analyzed the DREAM groundwater source for over 400 constituents over a period of a year. Much like EBMUD’s current drinking water sources, none of these constituents exceeded the maximum contaminant levels set by the EPA.

The results of the DREAM pilot will be used to evaluate the possibility of pursuing a larger groundwater banking project in San Joaquin County with the goal of improving EBMUD’s long-term water supply reliability while also benefitting the ESJ Subbasin.

Other Sources of Information

Additional details about the DREAM Project can be found on San Joaquin County’s DREAM webpage and NSJWCD’s website.