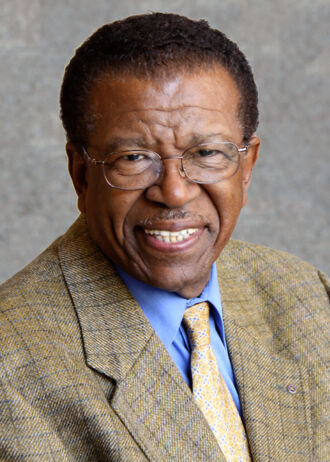 Portions of Oakland, including East Oakland and the area south of Park Blvd/5th Avenue to the San Leandro boundary

William "Bill" Patterson was appointed to the East Bay Municipal Utility District's (EBMUD) Board of Directors in September 1997 to fill the un-expired term of Director Ken Simmons, representing Ward 6 which is comprised of portions of Oakland including East Oakland and the area south of Park Blvd/5th Avenue to the San Leandro boundary. He was later elected in 1998 and re-elected in 2000, 2004, 2008, 2012 and was appointed in 2016 and 2020. He previously served as President of the Board from 2005 to 2007 and as vice president from 2003 to 2005 and 2015 to 2018.

Director Patterson is a supporter of EBMUD staff and is proud of their accomplishments. He advocates for diversity and equality in employment and in contracting. Director Patterson serves on the EBMUD Legislative/Human Resources and Finance/Administration Committees. He serves on the boards for the Freeport Regional Water Authority and the Upper Mokelumne River Watershed Authority. He also serves as a representative for the Business Forum and Oakland Chamber of Commerce. Director Patterson is immediate past vice president of EBMUD’s Retirement Board where he served from September 1997 to January 2015.

Director Patterson is widely recognized as one of Oakland's civic champions. He is a current member of Oakland’s Urban Strategies Council Board of Directors. He has been actively involved in many political campaigns and community organizations for more than four decades. He has received numerous awards in recognition of his accomplishments from governmental, community and political organizations.

Bill is a past president of the Oakland NAACP. He is a retired Oakland Parks and Recreation manager, who has been credited widely by many superstar athletes who have gone on to gain Hall of Fame recognition, including the likes of basketball's Bill Russell and baseball's late Joe Morgan. He was also a close confidant and adviser to the late Oakland Mayor Lionel Wilson, the city's first African-American mayor. He has also served on the Oakland Public Ethics and Parks and Recreation Commissions and Workforce Investment Board.

Patterson received his bachelor's and master's degrees from San Francisco State University and pursued graduate study at UC Berkeley. He resides in Oakland with his family and remains active in numerous community activities.